Transformed by Southern seas - the cold beauty of the ice.

Hey we survived! We're back in Ushuaia, after having visited the Falklands, South Georgia and the Antarctic Peninsula. Somehow I feel different, having experienced some challenging and fascinating experiences, together with with some very interesting people – especially, but not only, the kayaking bunch.

Gold Harbour in South Georgia is the paddle that springs most readily to mind, not because of the glacier calving right in front of us, but because of the standing waves that greeted us as we addled out of the glacier's lagoon. The tide had dropped, and the swell outside had increased markedly, but Marie and I faced up to those waves like the old pros that we aren't, paddled hard and strong through the break, and then back through the heightened swell to the challenging climb back up on the swaying lurching ship. We heard later that those conditions for reboarding were too extreme, but we did it anyway.

Seeing Shackleton's grave, plus the cross erected in his honour by his men at Hope Pt at Gritviken brought a lump to my throat, and also walking the last 5kms he, Crean and Worsley walked from Fortuna Bay over the mountain to Stromness was very evocative, and helped me understand the struggles they had, especially when I was nearly thigh deep in thick snow.

Peltier Channel from Pt Lockroy on the Antarctic Peninsula was another remarkable paddle, and hasn't been paddled in its entirety by a group from the ship before. The weather had cleared again, miraculously, and here we gliding along through spectacular snow encrusted peaks set against an azure blue sky.

The beauty of the Lemaire Channel in the evening was almost overwhelming, awe inspiring, and very very beautiful. I could hardly bear to tear myself away to go and enjoy the fabulous BBQ that had been prepared on the back deck in case I missed some of the unfolding beauty of the channel.

I think with amazement back to the grandeur and majesty of the landscapes we've seen, the wonderful weather we had, and also to the cohesiveness and friendship of the paddling group plus other passengers – and also the challenging paddling! South Georgia was every bit as wild and ruggedly beautiful as I thought it would be, and I'd love to go back – there's so much that we didn't see. 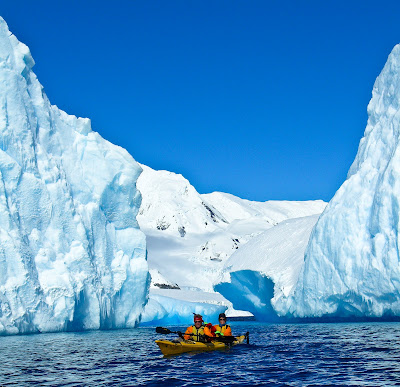 Hmmm - yes I did say that the weather was great - and yes I am including 2 days of Force 8 - 9 winds and 7m swells coming back through the Drake Passage. Not sure Marie will agree with that thought though!

I loved the Falklands and South Georgia, but also the Antarctic Peninsula equally. Paddling the Peninsula seemed to fall into a pattern. Up early, zodiac set off with non-paddlers, and then we paddled off after climbing down a rope ladder, into a zodiac and then into kayak while our trusty guide kept the kayak steady. Did the paddle, back to ship for lunch, the ship moved on and then the whole procedure happened all over again.

One particular paddle comes to mind. Half Moon Island, the wonderful shapes and colours of the icebergs with blue sky and flat sea, penguins, birds – what more could we want. And a lot more.

There was always the thought of chunks of ice falling and creating small tidal waves etc. In particular Paradise Bay which had a huge magnificent glacier. We paddled down towards it while hearing booming noises in the background which to me sounded like chunks of ice breaking off the glacier. Paddled through a large patch of brash ice and on way back wind etc.

Big swells and wind on way back through Drakes Passage to Ushuaia with two days open sea. Still all worth it.

Upping the ante in Ushuaia 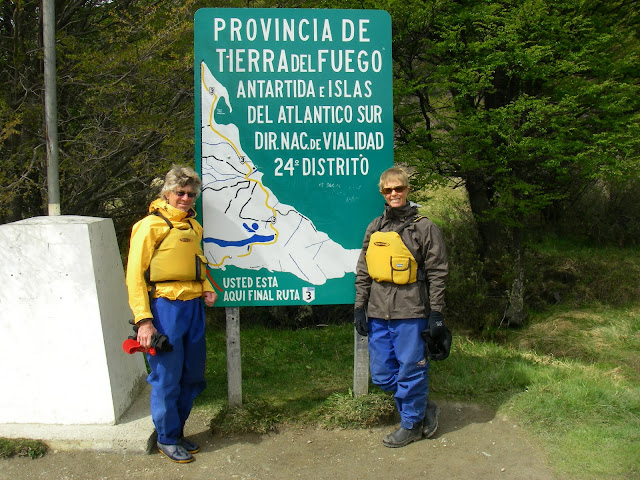 A long bus trip from Puerto Natales – 12.5 hours. Very interesting, but I wouldn't do it again. The last part into Ushuaia is brilliant though, with the road winding its way up and then down through massive high snowy mountain peaks. Ushuaia itself is quaint and pretty with some fascinating and different architecture – it seems to have its own 'fin del mundo' style. We've been on a day trip which included a genteel canoe trip on a bay in the Tierra del Fuego National Park, followed by a 3 hours walk along the shore of the Beagle Channel (Canal, they call it). Yesterday we took a tour to Martillo Island where there is a Pinguineria, with Gentoo and Magellanic penguins, plus other wild life – all fascinating and utterly delightful, in spite of the driving snow and wind! This morning we've woken up to another snow plastered world – we're starting to wonder if we're carting the weather around with us.

Today we leave on the Polar Pioneer (Aurora Expeditions) for the Falklands, South Georgia and the Antarctic Peninsula, back on 27th November. There'll be no internet connection for us on the ship, so this is it for now. Ciao!
Posted by Daring2Go at 4:20 AM 2 comments:

Chilling out in Chile - and how! 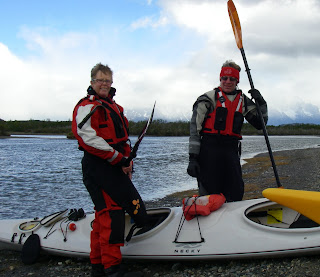 Marie and I have come up with 'bleak, desolate, cheerless, unkempt and windswept' for Puerto Natales. What's even more we didn't care for our first hostal very much, and moved ourselves + stuff to 'Erratic Rock' when we came back from kayaking! The three Serrano River days were wonderful and varied. We had another colourful guide, a native born Chilean Patagonian, called Angelo. With dreadlocks tied on top of his head, our mischievous mate drinking kayak guide supremo, you didn't want to underemphasize his professionalism on the water. We were well cared for. The first day we quickly reached a waterfall area where we had a 70m portage, somewhat challenging with the kayaks still loaded (single for A. and a double for us), but it was manageable with a fair amount of huffing and puffing up and over a small hillock. Lots of ducks (I'll bet some are related to the NZ Paradise shelduck) and other birds – including 4 condors - all fairly challenging to photograph from a moving boat. Quite good sitting in the bow position though, as it meant I could just stop paddling and take pics - and let Marie keep paddling! Very cool (blimin freezing actually) I thought. We had a seriously windy corner to manoeuvre around as we came in sight of the Tyndall Glacier, and needing to keep our wits about us we kept paddling across from ridge end to ridge end, against the wild wind that kept battering our starboard bow quarter. Not nice, but the immense relief after getting around it safely and then landing at our campsite was worth it. We had a great view of the Tyndall glacier, so decided we'd go and explore it the next morning, instead of heading straight back to Pt.Natales. After dragging our boats part way up a side river (after a rather exciting + scarey ferry-type crossing) we set out on a long plod across the shingle (with a bit of quicksand thrown in), only to find our way to the forest edging the glacier lake was blocked by an impassable river with too much current. Just as well we didn't go any further though as we reached the next campsite at Monte Balmaceda just before a heavy storm hit; the one that had us in the blizzard the next morning. No paddle over to the foot of the Serrano glacier next morning for us either, as the whiteout was too intense for us to paddle safely (ok Angelo! - by the time we stopped taking pics). We did paddle across the fjord about midday though, in order to catch the ship back to Pt.Natales. We loved every minute of these three days!

Marie here: Really I think the Serrano River kayaking has been the best adventure so far. Very scary in places and at times we were all yelling at each other. Waking up with a snow covered tent was wonderful plus the fact that we were miles and miles from anywhere – and no-one knew where we were, except for Angelo, and we weren't even too sure where he was! Heaps and heaps of snow. I actually enjoyed the fjord paddle best probably because of being used to the sea, but it wasn't long enough though. I enjoyed the boat ride back to Pt Natales too.

El Chalten - our initiation into the snow and the cold 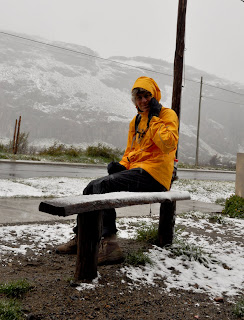 Marie in El Chalten, as the snow was letting up

I think I last got in touch from El Calafate, over in Argentina?, - at the north end of Argentinian Patagonia. We spent nearly all the 1st day seeing the Perito Mereno glacier, which is huge, rather awe inspiring - as long as you don't mind if your glacier comes coated with touristos multos. It all took too long for our liking; a lot of effort/time. We had a huge rush when we got back to town to catch the late bus up to El Chalten, about 3.5 hours trip, through some magnificent country, into some even more majestic country, up in the mountains, one of which is El Chalten itself, or Fitzroy. We woke to light snow, which thickened up quite quickly, meaning that we had an enforced stay looking around a pretty little mountain village.  Then we got very lucky as the weather cleared enough for us to walk 1.5hrs up into the mountains, and get a mysterious and tantalising view of El Chalten and Cerro Torre. The Chilean firebush is flowering now, and is gorgeous!

The next day we were on a bus bound for Puerto Natales, and kayaking the Serrano River, starting at the southwest corner of the Torrest del Paine National Park, and carrying on down through the Bernard O'Higgins National Park.
Posted by Daring2Go at 4:17 PM No comments: 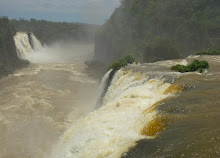 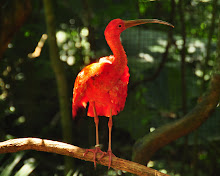 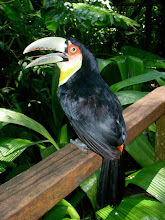 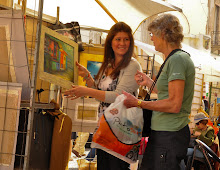 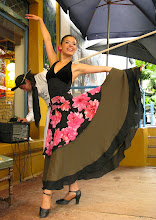 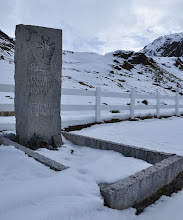 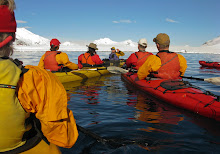 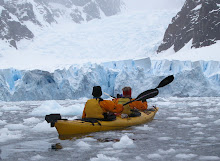 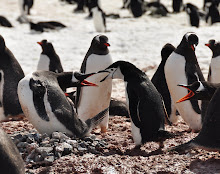 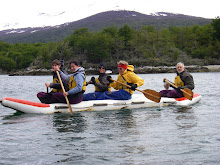 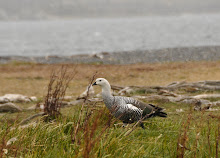 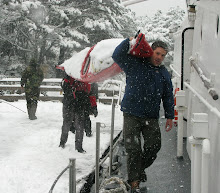 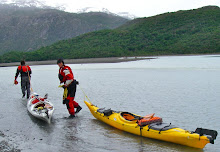 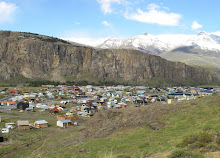 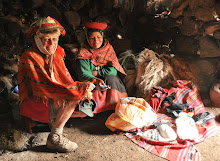